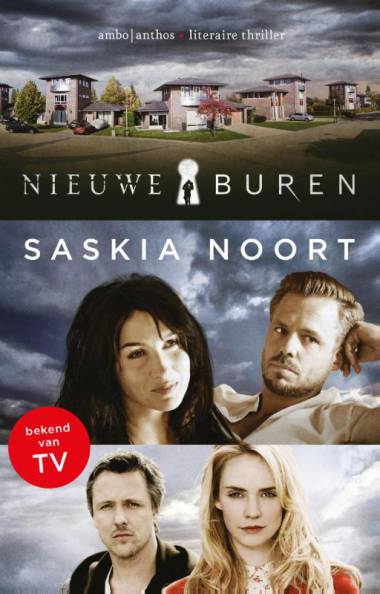 Life on a new housing estate

If the new Dutch landscape can be characterized by anything, it is the large-scale new housing estates near to the major cities. Street after street of identical houses in neat rows. The television is located in the same corner of every living room because that’s where the architect placed the power point. Each occupant sits in the same IKEA sofa in front of the tv. ‘Nothing ever happens there’ is an often-repeated comment by people who don’t live there.

In New Neighbours Saskia Noort uses this type of identikit lifestyle to serve as the background for her extremely successful third book in which two married couples throw conventions overboard in a terraced house in an anonymous street. Ultimately this will have far-reaching consequences.

As is customary in her books, Saskia Noort begins with an everyday scene. A disappointed yuppie pair move into a new house on a housing estate. The nursery school teacher and sports writer have grown distant from one another but hope for a fresh start in a new neighbourhood. At a local get-together, they become acquainted with their neighbours, an unconventional and seductive pair. They begin on a dangerous joint venture.

Saskia Noort is popular not only for her animated dialogues and fine descriptions. Like other new female writers in the Netherlands, she tends to base her work close to home. There are no wild adventures at exotic or remote locations. The successful novelist seeks her extremes in familiar surroundings. In New Neighbours, she explores the limits of raw and unlimited sex.

Saskia Noort has paved the way for a whole new generation of female writers who, without exception, resemble her in that they choose normal people in city suburbs as their subject. But New Neighbours is such a success – it has broken all sales records and more than a million copies have been sold in the Netherlands alone - that no one can currently compete with the Dutch Queen of Suspense.