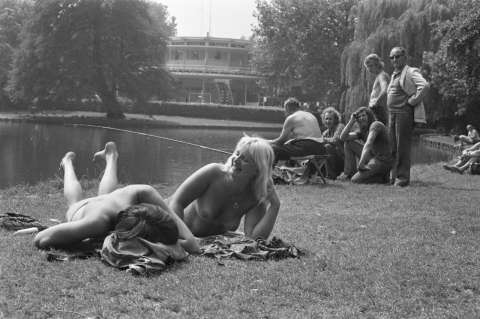 Return of the Real Tit

Saskia Noort wonders what happened to them: the crooked tits, the big tits, the small tits, hanging tits, outwardly pointing tits, pear-shaped tits, apple-shaped tits, and also banana-shaped tits. ‘I am in favour of the Return of the Real Tit. Flaunt them, your boobs, so often and so long and so much that no one makes a fuss about them any longer.’ Read Saskia’s monthly column for LINDA.Magazine here.

Getting straight to the point here: yes, things aren’t what they used to be. And I don’t mean the days when we weren’t allowed to vote and our granddads worked in the slave trade. No, I mean the eighties. They are back in fashion and not for nothing. By the way, when you encounter clothes from your formative years, for the third time, you really are getting old, but never mind.

Not coming back, alas, is topless sunbathing. I can’t remember ever having put on a top until, let’s say, my thirties. You were able to just buy the bottoms in those days. And I only wore a bra when I wanted to make my tits bigger than they were. No one really cared. Nipples and side-boobs, people would probably notice, but no one ever made a fuss about it. Nor about pubic hair, for that matter. We wanted to be footloose and fancy-free  on the beach with our tanned tits and that’s what we did. ‘We’ in this case means literally everyone. Fat women, skinny women, with crooked tits, big tits, small tits, hanging tits, outwardly pointing tits, pear-shaped tits, apple-shaped tits, and also banana-shaped tits. Along the way we learned that everyone looked different and you recognized each other by their tits. And the boys/men got used to it. One extra pair of tits, they couldn’t care less. Of course, some types of tits were more popular than others (my very busty girlfriend M. was a pretty popular beach baller), but it was all easy-going. Our mothers joined in too. It was just wonderful. No cold pieces of cloth around your breasts after swimming, no knots in your neck, braces under your armpits, no pads that keep on leaking, no white streaks on your skin. I remember a Rolling Stones concert, already old then, just imagine, that I went to with my parents, uncle and aunt and it was so hot that everybody got rid of their t-shirt or top. We just stood there singing along in our bare boobs.

Nowadays that’s out of the question and that’s a real shame. I still do it, on Ibiza, where a few other quirky types are still up for it and they’re mostly old bags, even older than yours truly. Is Islamisation to blame for this prudishness? Of course not. It’s our own fault. We let ourselves be robbed by social media. Because playing beach ball in your bare boobs is one thing, flaunting them on Facebook or Instagram is another. I personally am not too bothered, appearing topless on Twitter, were it not for all these bozos wanting to say something dirty about it. And that’s what was so good about ‘before’. Those bozos just kept their mouths shut, and jerked off to Vanessa (Dutch big-breasted celebrity) in a magazine.

So we’re back to square one and that’s where the tit should be covered up and is only okay when it meets with the illusion. And so we fill them up, hoist them up, and in the gym we take showers with our tops on.  Or we have them cut open and put plastic in them. I’m in favour of the Return of the Real Tit. Flaunt them, your boobs, so often and so long and so much that no one makes a fuss about them any longer. Teach our daughters that they are beautiful and all different. Bombard these bozos on social media with breasts. Give them freedom and space. They already have so much to endure. But I’m afraid I’m just a voice crying in the wilderness.


This column was published in the September issue of LINDA.Magazine.